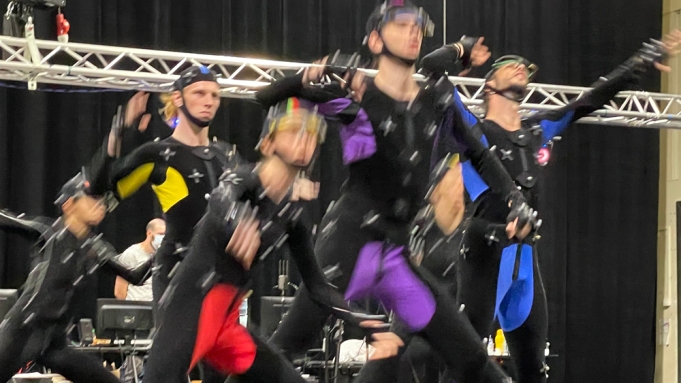 Founded by Rémi Brun in 2007, MocapLab offers state-of-the-art motion capture services, from its facilities on the outskirts of Paris.  It has a strong R&D department and has been recognised by the French government as a research entity.  It is a member of several state supportive innovative business groups such as CAP DIGITAL, OSEO, Agoranov and Paris Innovation .

The company recently received a grant from France's CNC to reinforce its offer as part of the CNC's €10million ($11.4 million) technological modernization scheme launched in 2021.

At PIDS Enghein, an event that runs Jan 26-29, MocapLab will take part in a demonstration of extreme mocap, in which it will show mocap shot for an ambitious bicycle jump  in a large venue in Annecy produced by Ubisoft, and a motion capture recording of horse riding, a tennis match between Novak Djokovic and Gael Monfils, and Sean Connery in the Bahamas.

"We started doing mocap 28 years ago," explains Brun.   "We were the first in Europe at that time.  Mocap is getting bigger.  We want to use this new influx of financing to moving from being an experimental studio to an industrial studio."

The current expansion plan includes increasing the studio space, purchasing more cameras, and increasing staff and R&D facilities.  Currently employing between 15-20 staff, the studio plans to double its size over the next 3 years.

MocapLab has provided services on numerous film and TV projects, including Luc Besson's "Valerian and the City of a Thousand Planets," and Roschdy Zem's "Chocolat."

The motion capture business is changing rapidly, driven in part by new artificial intelligence tools that make it possible to develop 3D characters such as Unreal Engine's MetaHuman Creator, which can be used in traditional film and TV projects and immersive projects.

MocapLab is working with Unreal and Unity to improve the production pipeline.

"The cost of rendering and building assets is dropping quickly," says Brun. "But what stays at the core of the story is the quality of the acting and camera work.  It's becoming the central part of the the project because it makes it easier to render the final assets.  That's where our expertise comes to the fore.  We can improve high quality details, such as face and finger movements.  When you want a good acting performance, it's important to focus on these minute details.  With the new tools the mocap pipeline is becoming more efficient, faster and economically accessible."

Brun believes that producers should be careful with low-tech approaches, because some haven't understood the power and richness of movement:  "You can't transfer emotion to your virtual character without respect for movement.  The culture of movement is often lacking.  We view ourselves as "movement engineers," just as there are sound engineers.  As everybody knows, recording sound takes a great deal of care.  It's the same thing for movement.  Sound and movement are similar.  They both convey life and emotion."

The studio is working on AI tools for recognition and generation of sign language and has developed several sign language apps.  Using software to create Metahumans, they have shown that it is possible to automatically generate sign language, offering a significative advantage for inclusive TV productions.

One potential competitor to motion capture work is virtual production, as explored in Disney's  "The Mandalorian," and also to be applied in upcoming French futuristic documentary "2080."  Brun is nonetheless confident that demand for motion capture will continue to rise.

"Virtual production allows you to work with real actors in a VFX-created space.  You can create a photo-realistic world , but you're not shooting in 3D. You film one set up at a time.  We believe that you can capture the emotion of actors without using immediate photo-realism.  Our approach is ideal for videogames and immersive production. and has proven its strength  over the years in film and TV."

Brun believes that photorealism is not the only possible route, citing the Uncanny Valley phenomenon, where the images look almost real but not quite enough, which makes viewers feel uneasy.   "Who says that we require 100% photorealism?  Is that the case with paintings or photos?  Im sure we will soon see more amazing non-photorealistic mocap movies.  We are working on some pilots and are delighted to show producers that this is an exciting new approach, and also economically viable which will provide a lot of creative freedom.  Mocap is not just for blockbusters!

Videogames are an important part of MocapLab's activity, including recent work on the latest "Syberia " video game for which it has shot 4 hours of film.  "We've produced very powerful assets for this game, which demonstrates what we can do," explains Brun.  "There are always constraints, but the quality we have achieved demonstrate that with a little more available resources we could make a wonderful TV series using this approach."

MocapLab is providing services to Stage 11 for a project that aims to reimagine music for the metaverse by combining, music, games, mixed reality, and digital collectibles.  The project involves working with French street dancer Salif Gueye, whose dance moves are recreated in real time.

The studio also provided motion capture for the project "Room with a View," a dance performance created in 2020 for the Théatre du Châtelet, by Rone and (LA)HORDE, whose live performance was cancelled due to the pandemic and then recreated as a virtual show on Culturebox.

In addition to a large amount of commercials, music videos is another important area of work, including a video for S+C+A+R+R that has generated over 3 million views on YouTube and "Free Fire -  to the Max" for Passion Pictures.

The studio has produced "Notre Dame Eternelle," a virtual visit to Notre Dame over the ages for Emissive and Orange, "Farming Simulator," by Capsule Studio, and "The Nutcracker" a real live dance show with holograms  of virtual dancers in a dream world on stage, written by Elsa Bomtempeli.

"Motion capture based on our technology and expertise can provide unprecedented visuals," concludes Brun.  "Once one has seen the power of movement, of its richness, its subtleties, and how it is at the core of actors' performance, it is clear that the era is promising.   If you have a good story and good actors, you can enter a high quality mocap studio and record hours of storytelling in a few days and then have it in your computer to edit in 3D.  It's worth spending time to do multiple camera work, edit, try using more cameras, proceed with the edit and reshoot some pick-ups if necessary.  This is all very simple, because mocap is a simple process.  Then you can finalise the sets, lights, models, effects.  A new world of expression, based on real movement, is opening up."